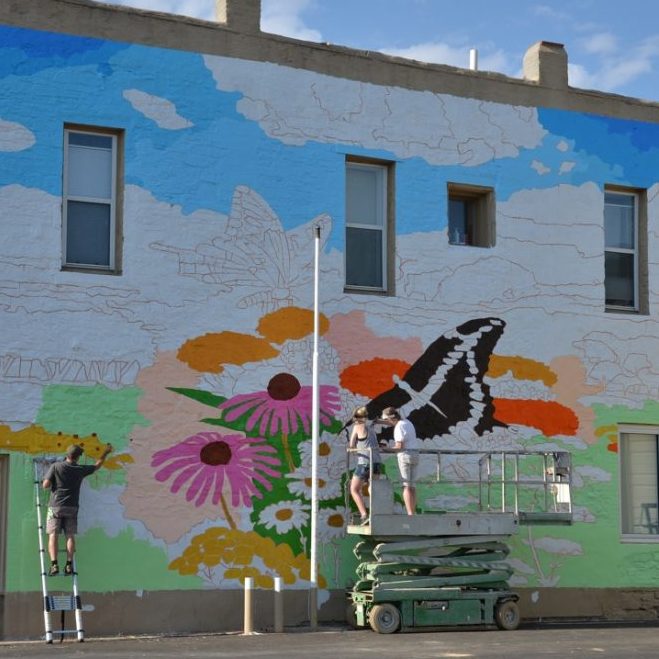 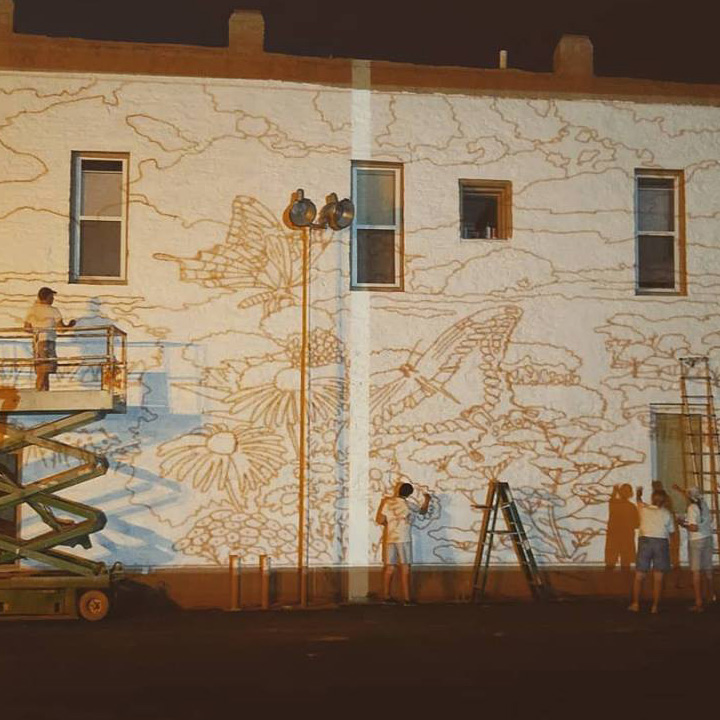 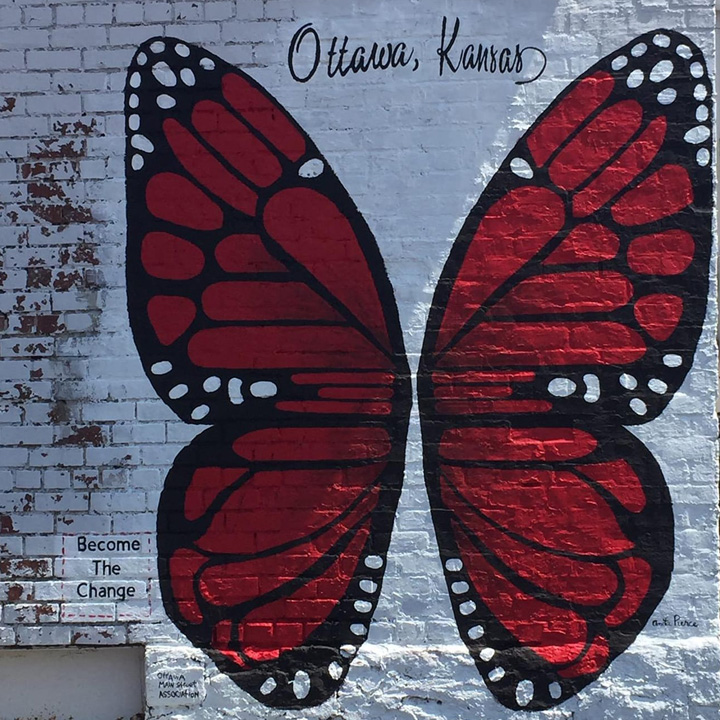 It was a crisp but sunny day in November of 2017 when Debra Sue Dunlap;
Ottawa Community Arts Council Member and curator of the William H. Howe
estate met with Lenni Giacin; Ottawa Main Street Director, Susan Rader; Franklin
County Tourism Coordinator and Dave Loewenstein to talk murals. Out of this
brainstorming lunch the idea for the Butterfly Mural was formed.

World renowned mural artist, Dave Loewenstein had befriended fellow artist and
Ottawa resident, William; or Bill as he was known to the community, Howe a few
years before he passed away. Dave recounted how it had always been a dream of
his friend Bill, to paint a large mural in a public space in Ottawa. While excited
about the prospect of fulfilling Bills artistic dream, the mural partners had much
to learn about the process of seeing an idea become a reality. This would be a
unique mural, an actual reproduction of an original piece of artwork, this added
to the pressure of making sure we got everything right.

Throughout the winter and spring months, the mural committee partners began
working. A timeline was established to keep the project on track. Grant
applications were written and submitted to fund the painting of the mural. The
image to be painted was chosen; an original work of art painted by Bill, and
approval was obtained by the estate. The committee was honored to contract
with Lawrence resident and mural artist, Dave Loewenstein for the painting of the
mural. The mural site was chosen, building owner, City and adjoining occupants
permission obtained. Generous community members donated time, money and
in-kind services and supported the project. All this behind the scenes work was
necessary, but the mural partners had also been educating and building
excitement from the community about the project.

The painting process began in the heat of July 2018. Dave, his student intern
Ottawa High School student Callie Mongold, Debra and community partners;
elected officials, business leaders, neighbors, families, and children took part in
the process. The site was dedicated in a public ceremony on August 20th, 2018. As the
the crowd of supporters, community leaders, and project members were thanked, the
sun parted the clouds and it was as if Bill himself was smiling at the newest art
addition to Ottawa and the realization of his dream. 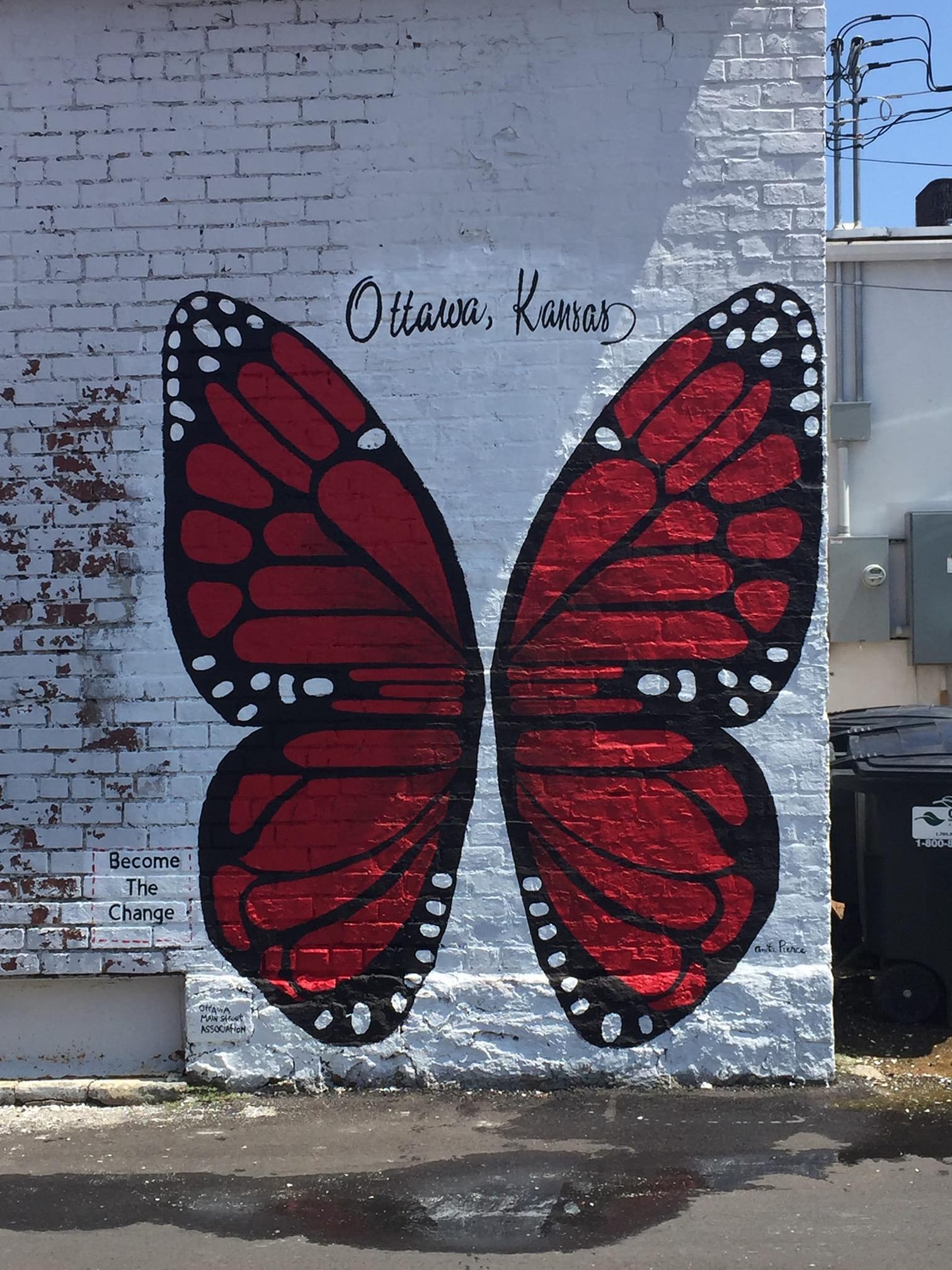 Learn more about this topic. 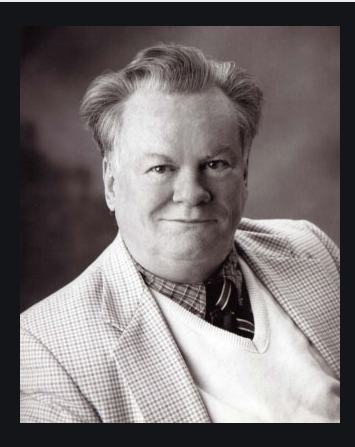 William H. (Bill) Howe was an internationally recognized expert on butterflies and moths. Locally, he was known as the “Butterfly Man”. Described as a bit eccentric, Bill “walked to the beat of a different drummer”.

Bill’s father, Edwin Walter Howe, was an entomologist with the USDA and would take his small son, Bill with him on field expeditions looking for insects. Bill much preferred chasing the beautiful butterflies to looking for crop-destroying things such as corn borers or boll weevils. He began drawing as a 7-year-old child, filling sketchbooks with perfect illustrations. Over his lifetime Bill created thousands of illustrations and hundreds of paintings. Bill continued painting up to 2009 shortly before he passed away in Ottawa, KS.

In 1941, while he was still a child, Bill and his family moved to Ottawa. He was encouraged in his pursuit of art by his mother, Eugenia Ursula Mercante Howe. She loved beautiful things and saw in her son the same appreciation for them, plus the talent to reproduce them. He attended Ottawa University graduating in 1951 with a degree in Biology. This was at his father’s insistence, but after getting his degree for the ‘real world’, his father allowed Bill to attend the Kansas City Art Institute and later the West Coast Institute of Art at Berkeley. Bill’s passion was butterflies and moths and he limited his painting almost exclusively to Lepidoptera.

While at the KC Art Institute, Bill’s work was seen by George Krug, owner of True Color Publishing Company. Krug was so impressed by Bill’s painted butterflies that he insisted Bill let him publish a book of them and convinced Bill to write the text. The result, “Our Butterflies and Moths” by William H. Howe was published in 1963. This book came to the attention of Doubleday Publishing Company who then commissioned Bill to create over 2000+ butterfly illustrations included in, “Butterflies of North America” published in 1975, which is recognized as “the bible” of butterfly books.
Bill traveled extensively to collect butterfly specimens, traveling to Guatemala, Honduras, and Mexico over 75 times. He preferred painting primarily in acrylic paints from real specimens. Among his other published contributions were illustrations in Readers Digest’s 1982 “North American Wildlife” and a 1984 book called “Mariposas de Mexico”. Governor Mike Hayden recognized him as “Kansas Artist of the Year” in 1987 and in 1984 the Kansas Arts Commission funded a tour of Howe’s paintings called “Butterflies of Kansas”. In 2009 he was an Ottawa High School Wall of Honor inductee. Howe was featured or had solo exhibits in many galleries such as Dyche Hall Natural History Museum at KU; Carnegie Cultural Center in Ottawa, KS; Coutts Gallery in El Dorado, KS; Spiva Art Center in Joplin, MO; and Heard Museum in McKinney, TX, to name a few. His works are in public and private collections across the country such as the Smithsonian Institute and numerous recognized museums.

In 1993 Howe was featured on KTWU’s channel 11 “Sunflower Journeys” and Larry Hatteberg’s 1994 book titled, “More Kansas People”. Bill had a very generous spirit and made extensive donations of his original paintings, books and butterfly collections to museums and libraries across the nation. Many Kansas public libraries were gifted an original Howe painting and book “Our Butterflies and Moths” during his life. It was important to Bill that his fellow Kansans have the opportunity to enjoy the beauty of the butterfly by way of his paintings. The Double Day book Prologue written by Bill encapsulates his passion, “The purpose of Butterflies will not be found…in the few flowers, they may inadvertently pollinate. Nor in the numbers of parasitic wasps they may support. And to peer beneath a microscope at their dissected fragments will in no way elucidate the reason for their being. Their purpose is their beauty and the beauty they
bring into the lives of those of us who have paused long enough from the cares of the world to listen to their fascinating story…” Compiled and contributed by Debra S. Dunlap